I have wanted to model this building for over ten years! I thought about making a kit of it – and still might! Needing to scratch build several buildings for the AP I finally got around to building the depot in Lehi, UT – the oldest, restored, still standing railroad building in the state of Utah! 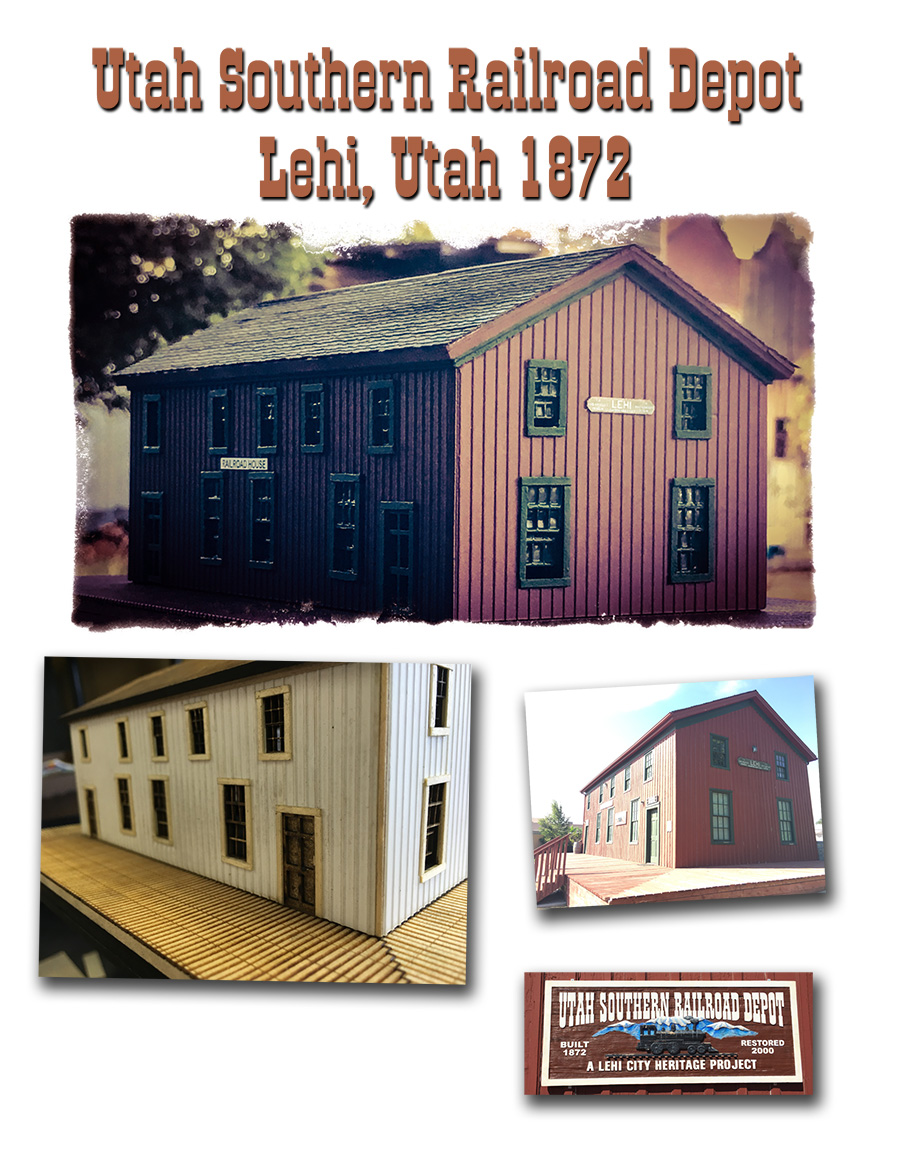 I included numerous construction photos as well as prototype photos for the judges. As time allows, I might add a few here but for now you at least have a couple! Below is the write-up I included for the judges.

I used masonite for the substructure and board and baton sheet styrene for the outside. I wanted to build a structure primarily using styrene because I have not used that material very much. I drew the plans in Adobe Illustrator and made the laser cut files from those drawings. I cut the windows from matt board and they were very fragile. I hand cut the window trim with strip wood. Since I needed a way to keep the flimsy sheet styrene I used the same cut files and cut masonite walls (accounting for the difference in width.) I used Micro-Sol for the windows. I wanted the station to look new (it was refurbished in the last decade) but without the modern items such as outside electric lights and the gutters and downspouts.

In using sheet styrene that was board and baton one problem was where I had the trim strips they didn’t fit flush so I had to scrape/carve off the batons in certain areas.

I also built the deck which may or may not have been part of the original structure but is surrounding it today.

Each of the 21 windows has 12 panes of glass that were individually added with the Micro-Sol! Interior walls were added based on the current configuration of the prototype. Every nail hole on the deck and the pattern of the fishtailed boards was added to the laser cut file to simulate the board-by-board decking, including the tiny boards at the end as currently on the prototype. The doors are multi-paneled as are the windows (two are in the open position.)

I measured the actual spacing and size of the building and windows and doors. Plans were also in the NGSL Gazette but if there was a discrepancy I went with my measurements. The way the windows sills are constructed are not how I would have built them but I reproduced them as closely as I could to the prototype and not my usual practices. The same with the spacing of the windows. It bugs my kids to see that there is no symmetry but I believe that is because of where the inside walls are located. I was able to tour the inside. The lower level is a museum but the upper level is city offices. I was given a special behind the scenes tour when I told them I was going to model the building. Also, the roof trim strips have a larger board and then a smaller one on top of it along the eve as well as the roof. Again, this is different than I would do but kept to the prototype example.

The building is spray painted and the windows and doors brush painted (before glass installed). The roof is lightly weathered to show some texture but the building is meant to be look well kept. The signs are printed and cut to fit. One sign was reduced from an actual photograph. There is very little signage on the prototype and some of it is too modern – i.e. museum and restoration information – I wanted it to look more as the original did.

The entire building and deck that it is on is completely scratch built! Every single item! As mentioned above, the windows were cut and built to match the prototype as was the rest of the building.