I hope you were able to enjoy the Intermountain Train Expo this past weekend. I know I did! Two full days of trains and friends! It went by too quickly. The Rocky Mountain Region had their Board Meeting after the show on Saturday. It was good to see friends from Colorado come out. In fact, a new friend, Martin Pirnat from Durango, brought a model to be judged for a Merit Award! I’m glad he did so we could see work from others in our Region. It was very well done, and a kit that I have but haven’t gotten around to building yet so it gave me some good ideas! 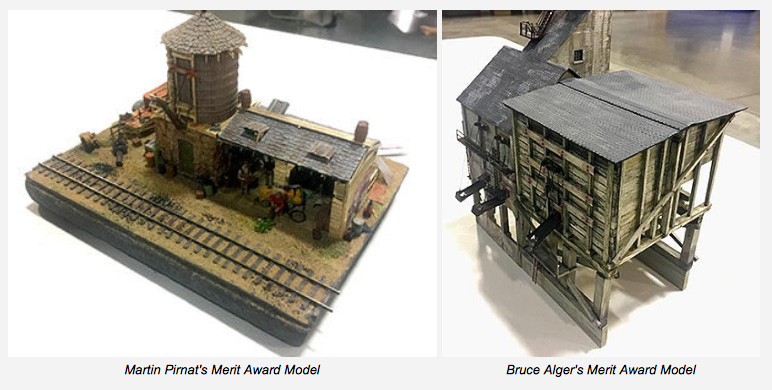 Bruce Alger said he almost brought a model and I told him to bring it the next day. I’m glad he did. I had visited his house a week or so ago and was able to see his layout. He showed me that model then and said he might be interested in having it judged for an AP Merit Award. At the time I wasn’t sure it would earn enough points because I just saw it on top of the plywood with lots of tracks around and didn’t take the time to study it. I was more interested in his “fancy” benchwork. Ask him about that next time you see him. 🙂 Anyway, I told him to bring it to a meeting so we could evaluate it. Well, I’m happy to say upon giving it a closer look, studying it with the AP guidelines, it is extremely well done and definitely earned a Merit Award! Well done, Bruce!

Al Badham brought two more of his cars, which of course earned Merit Awards because they were up to his usual high standards. They were very nicely detailed, even on the interior.

I’m glad there were a few who entered the Square Foot Challenge. Rick Luther’s was excellent being inspired from a photograph. I had fun doing it, practicing some scenery techniques I want to use on my layout. Lowell Didas’ grand daughters had fun being very creative. My favorite was Karin Gerald’s with her use of a HO boxcar as a large “building” on an N Scale scene. I loved the sense of humor with cows going in one door and people getting their hamburgers on the other side of the building!

We passed out more than four boxcars so we will be continuing with this in the next couple of months. I built mine in about a week or so of evenings, not more than an hour or so every other night. The longest time was spent letting the paint and glue dry! For me, having the deadline helped me get it done. I had been wanting to do a small project just like that to practice some new skills. Watch the website for details and we will talk about it at the next Division Event. So the rest of you, get thinking and be creative. It doesn’t have to be a realistic scene but can be. It also doesn’t have to be HO scale as Karin proved.

Events like the Expo give us a chance to share with each other and catch up with friends. I had a great time and I hope you did too. Let’s continue working on a new model or scene, whatever it might be. Let me know ahead of time if you plan to bring something to be evaluated at a Division Event. Even if you don’t want something evaluated, bring something to share with the rest of us and that way we can enjoy the journey together!