I’m not one to make “New Year’s Resolutions” because I think one should always be improving one’s self. However, when the opportunity presents itself I like to “resolve” to do better at a given subject.

Such an opportunity presented itself or rather I took a little extra time when I had an urge, to start a scratch build project to begin a journey on a path I had vaguely started down before. For the Cars AP Certificate four out of the eight required cars need to be scratch built. I’m not so much into scratch building as I am craftsman kits. Not that I don’t enjoy it. It’s just that some of these kits have such great detail and yet still a kit. I don’t have to hunt down where to get this and where to get that and that’s with already knowing what it is you want! Here comes the fun part though; after hunting down all those parts and putting them together to make a car you can say, “I built that from scratch!”

Many years ago I bought some supplies to make molds and cast parts. It was cool but not part of an actual project. This time I have a purpose. I’ve said it before and I will continue to say it, “That’s one reason I like the AP Program: to help me focus on a specific area as well as learn new skills I might not have already.” Before I used some commercial parts in my molds. This time, especially for the sake of scratch building, I made my own masters. I could have just used the “master” to make the car but I want to make several cars. I have another project I’m working on and the fact that I need a number of cars for it, well, I might as well get my Cars AP Certificate at the same time! Why not? 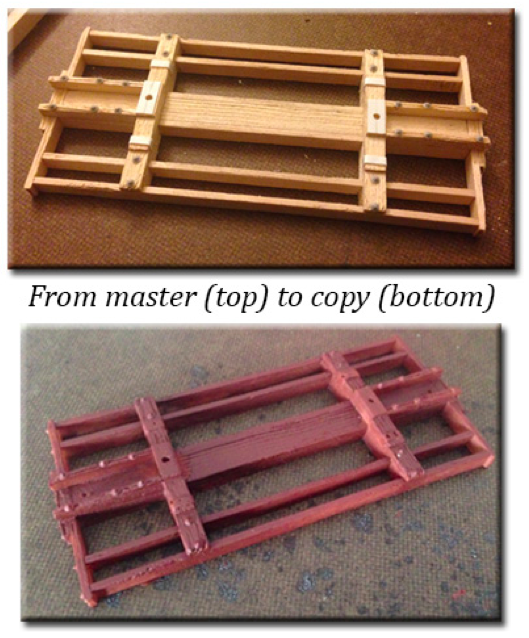 I made my master out of wood, styrene and some NBW castings laying around from another kit, and using high strength RTV rubber I made a mold of it. I figured if I made a car frame it could be used for the start of a flat car, box car, gondola and others. I also made a deck out of strip wood and will see about casting that as well as cutting one out on the laser machine. Each version will have some differences and I can see what I like the best. Maybe each car will have a differently made deck. I used a 1-to-1 ratio resin to make the copy but I really want to try casting it with low-temp melting metal. If it’s just a flat car it might need more weight to track better but we will see. Any other car I can hide the weight somewhere. Plus, it’s something I haven’t done yet and want to try it! I couldn’t find anything locally so will have to order it. By the way, did I mention I worked on this on and off mostly over the 4 day weekend I had because of the new year? After trips to several different stores I found all I needed, except the metal. At least I was able to get most of the project started. As far as those detail parts I had to hunt down, well, most are on order and I am anxious to get them.

It’s nice to have a few days in a row to work on a project. Where my resolution comes in is to have the patience while waiting for parts and to make the time to finish the cars once the parts have come. The good news is I have a couple of frames cast and am ready to make a flat car, box car, and gondola. I’ve learned a little more about casting than I did before and am excited to do more. Next month I’ll let you know (and share pictures) of how the cars turn out. I might even explain more about the other project I mentioned above. I normally model in HO/HOn3 but this project is in On30. Until then, if you are interested in making molds and casting your own parts, let me know. You might know something I don’t and can help me and I will share what I’ve learned and that way we can enjoy the journey together!