One thing I like about the Achievement Program is that is has allowed me to stretch myself and grow in ways in this hobby that I might not have even thought of on my own. I’ve said that before but it is something that came up recently on one message board I’m on. As mentioned last month, I’m working on my Cars Certificate and one thing that must be built is a passenger car. I’ve put together several “shake-the-box” kits that are passenger cars but they need to be either scratch-built or super-detailed for the certificate. One person’s response was why would I have to build something I would never use on my layout? As you could imagine, there were many replies such as build it for a friend, sell it on eBay or add a passenger line to your layout. I like the idea that it could just be in a yard or “railroad park” on display on your layout. What about trying a different scale and then just displaying it on a shelf with other railroad items? Whether or not he was too narrow-minded or unwilling to expand his horizons I don’t know but what a shame to limit yourself so much as to not want to even try something “outside the box” as it were. 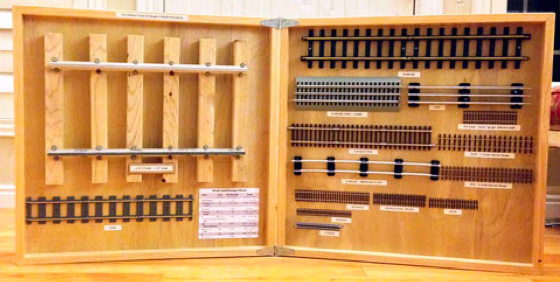 It was stated that the word “Achievement” is significant in the name of the program. If everything in the requirements were easy or to your own liking, would it be an Achievement? One person explained in detail how a certain passenger car prototype caused him to change his entire layout and what he modeled after seeing it. He also explained that his favorite scratch building medium for modeling for many years was with wood. He decided to try building this passenger car in styrene. It required him to learn different techniques which helped in learning and expanding his modeling skills. He was so pleased with how it turned out that he entered it into a Regional Convention contest and earned 1st place, and later at a National Narrow Gauge Convention it earned 3rd place! Now, styrene is his medium of choice and he’s using it to scratch build a locomotive for that certificate. What a way to stretch one’s skills, abilities and knowledge!

Some of my cars for my certificate are HO and HOn3, which is what I mostly model in. However, I’ve had a lot of fun learning new skills (and improving at things I’ve tried before) by choosing to do some in On30. Last month I explained some of what I’ve learned. I’m still working on them and hopefully by next month I’ll have them done and will explain more about that other project I hinted at. I know some things I’ve learned in this larger scale will help when working in HO too.

For most of us, we have chosen a scale to work with but it’s fun (and a nice diversion) to try your hand at a different scale, or you could have mostly modern equipment so why not try some good old steam?!? When giving the class for the Railroading Merit Badge the different scales are discussed and I recently made a display showing different scales and gauges. It’s cool seeing the different sizes and thinking about the opportunities in the different scales and gauges within those scales. It’s fun trying something different. Why not stretch yourself and try your hand at something new whether or not it’s for the AP. Don’t be afraid to try something new. I shared a new technique last month at our event and some guys were quite interested. What have you done lately? I’d like to know, as I’m sure others would too. Sharing these techniques can help others and that way we can enjoy the journey together.