What have you done lately to promote your hobby of Model Railroading? Notice I didn’t say the hobby I said your hobby. When I have done a clinic for the Railroading merit badge there are maybe 1 or 2 out of 20 in a class that are really interested. How many doesn’t really matter as much as the fact that you are sharing with others. My son has always said he doesn’t like trains. Well, that’s OK, I have nephews that do. A few weeks ago he said it’s not that he hates trains but he’s just not into them. In other words it’s not his passion. That’s an improvement because he used to say he hates them. He remembered how fun it was to help the kids doing the boxcar races and the excitement they had. Then, last week he volunteered to go to the train show with me! I was pleasantly surprised by this announcement. He did set a time limit though! We stuck pretty close to that time. We did have some lunch so that’s my excuse for going over! ? I think he was surprised how many people knew me because he commented on that several times. In the past I’ve told him that it’s not just about trains but it’s also about spending time together. Maybe that was his idea this time. I like to think so. 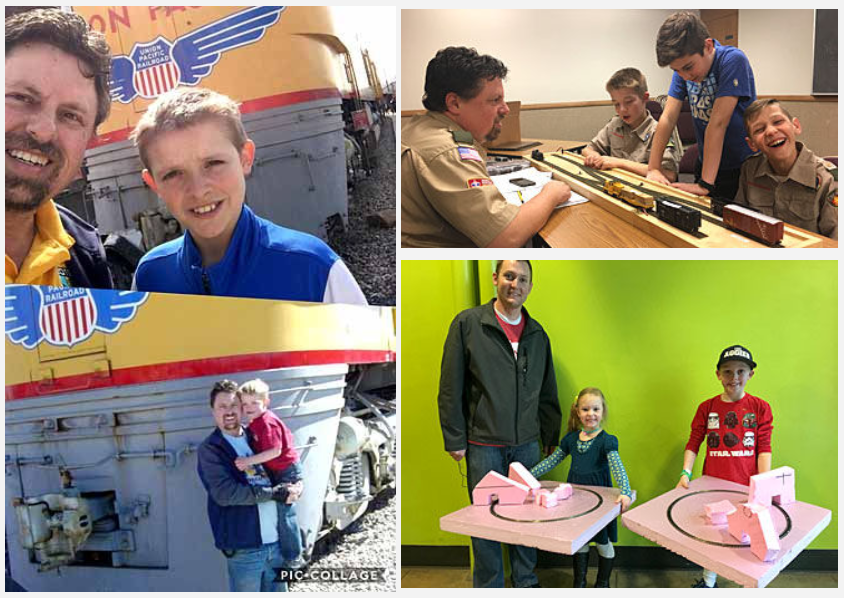 My daughter said something about 2019 and I asked if she knew what was happening in 2019. She said, “Yes, Dad! You’ve told me and it’s on your bright yellow shirt!” Ha! When you talk to others about the NMRA National Convention coming to Salt Lake City for the first time in 2019 what do you say? Do you say, “Come check it out, it will be fun!”? As long as they live in the state of Utah I like to take a little different approach. If you just give them a flyer or tell them about it by the time 2019 rolls around they might have forgotten about it even if they intended on attending. In my opinion, we don’t just want attendees. We need people to participate! It takes a lot of people to put on a National Convention. I’ve been to a few and even volunteered at one. We want people to start participating now so when 2019 rolls around of course they will be participating and helping at the convention, but more so they will have been enjoying themselves being a part of this hobby! Why make them wait two years? Get them involved now! Invite them to one of the Division Events or another activity. Promote the benefits of being in the NMRA right now and then guess what – it will be natural to tell them about the NMRA National Convention in 2019! I joined the NMRA when the National Convention was in my hometown in 2000 when I lived in San Jose. If I had known about the NMRA and meetings they held before then, there’s no doubt I would have joined sooner and been having that much more fun!

I’ve heard people around the country are taking note of what we are doing here in Utah! We are one of the few Divisions showing growth. One reason is all the activities and benefits we, as a Division, are offering. Partnering with the Children’s Club has shown to be very beneficial. Getting parents to have fun with their kids in activities they can both enjoy is awesome! Can you guess the theme for this month’s AP – Volunteering! Get involved more than just showing up. Really be involved and that way we can enjoy the journey together!