Well, I have not updated the info about my 4×8 layout as I had hoped! Sometimes I actually spend what would be time on the computer instead working on the layout! I have made a lot of progress. In fact, there are times that I just “railfan” my railroad! I like to watch a long train go around the outer loop and a shorter one go around the inner figure 8. Sometimes I switch them and have them go over the crossover switches but there are limitations to the inner loop – tighter radius and the clearance under the bridge.

Years and years ago I saw Gerry Leone do an “aerial photograph” of his layout where he took many pictures from high up and layered them. Not a seamless stitching but obviously many pictures overlapped. Kind of fun to do – and see. The other day I found our family selfie stick and started taking pictures. Easier than climbing up on a ladder like I did before. The hard part though was getting the same angles and sort of similar distances to make it easier to match up the photos in Photoshop.

We are finishing up some rooms in the basement so boxes are piled up around the layout and lots of things piled on top of it too! The trackwork isn’t complete so I purposely kept it messy so that later I can do it again when showing a more completed layout down the road and the difference will be more dramatic. The track not down yet is the switching yard and engine storage facility. There are also a couple spots where spurs will be added for industries. 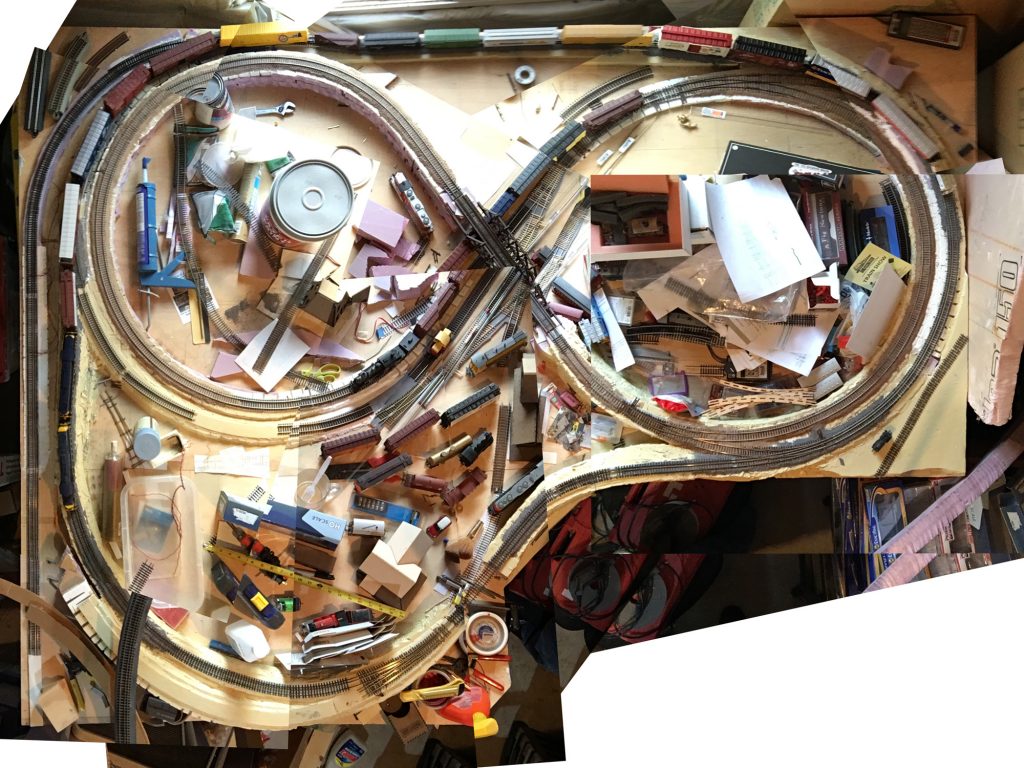 It is interesting to go back to my original drawing and see it is very close to the same. I changed the yard a little, added a reverse loop and another crossover. When designing a layout, even a small one like this, I suggest reading over the AP requirements for Civil and Electrical. Some things you can “do on paper” and some you have to actually construct. Knowing those helps in the planning and what could be a simple add now (in planning) might be something complex later.

I did revise the drawing above and it more closely resembles what I have constructed but there are still changes made while doing the construction. Sometimes, even if drawn carefully, might not be the best option in the “real world”! 🙂

I took new pictures after finishing more track and cleaning up the layout so it is no longer a storage table. There is a little distortion because this time I was on a ladder and took three pictures (without moving the ladder) that I stitched together. At the time this picture was taken, the layout is running the best it ever has. Lots of fine tuning and fun! It has been passed off for both the Civil AND Electrical AP Certificates! 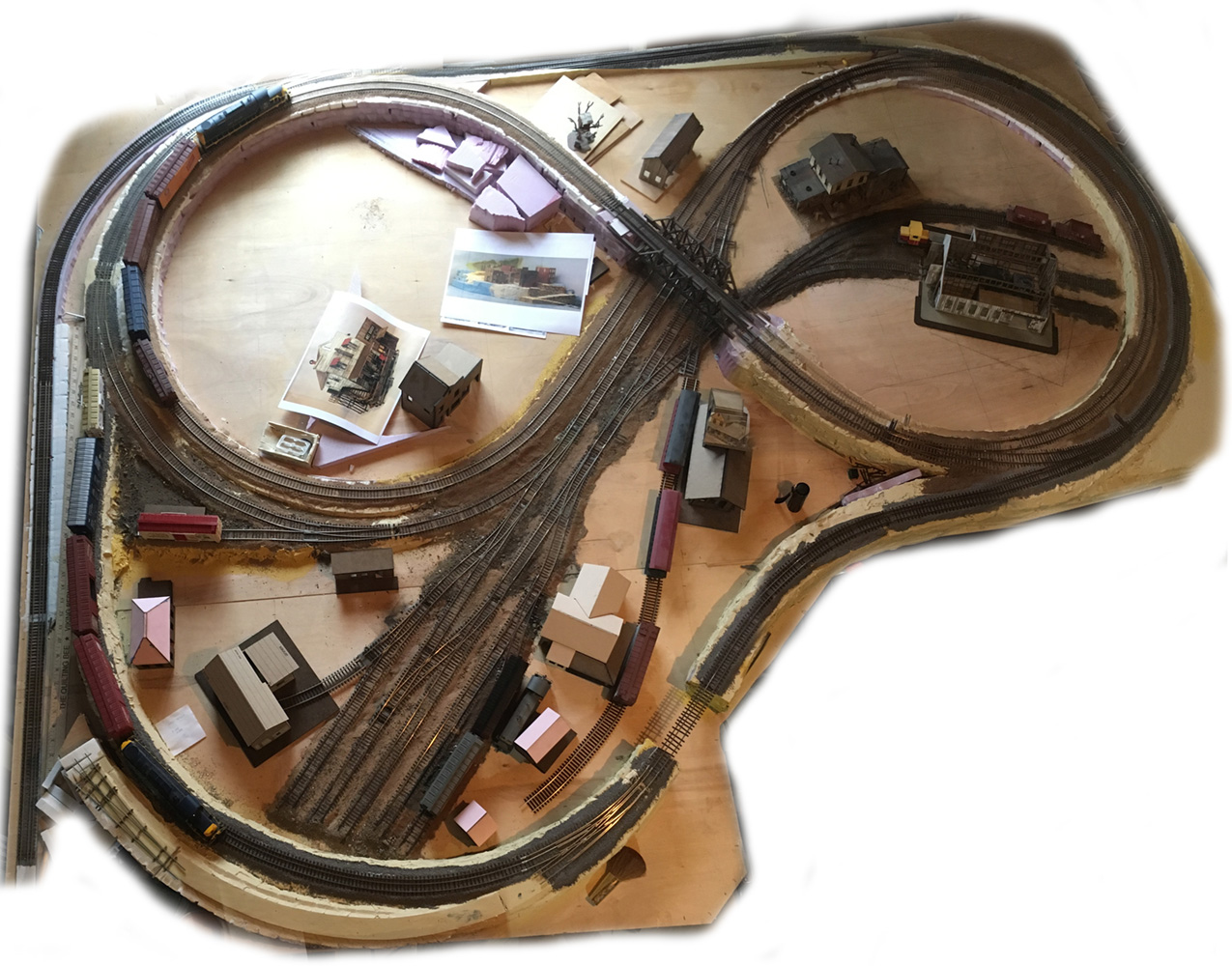 I took a few more pictures and I like this version better! 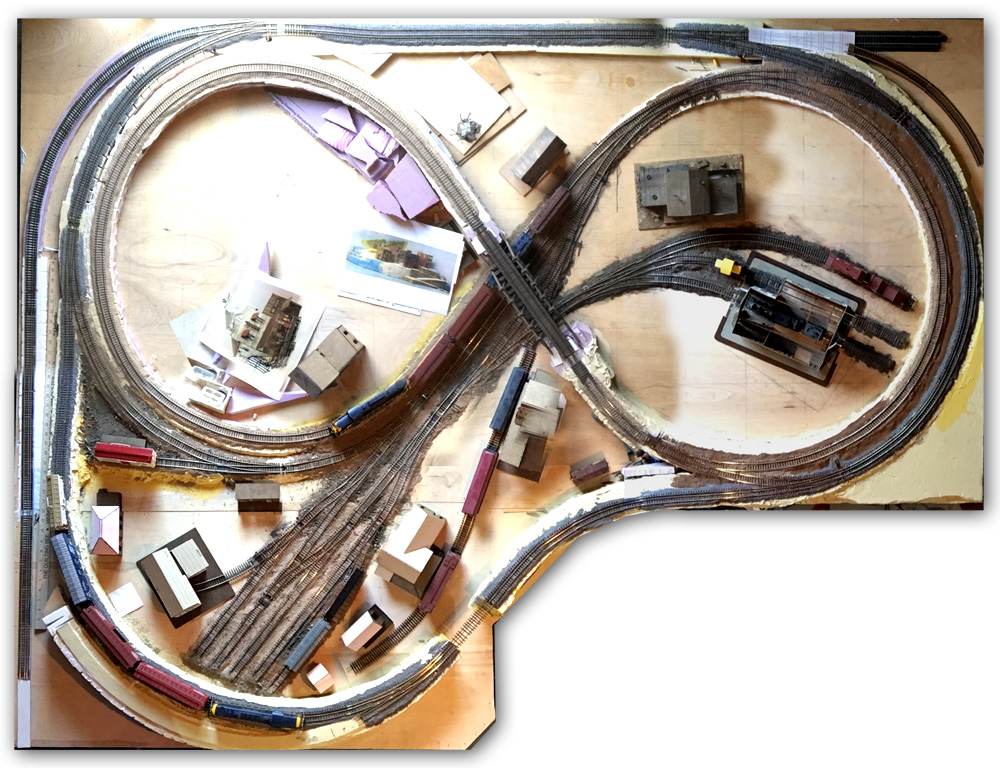 Planning the Layout <= Previous |  Next => The First Curved Crossover Turnouts