For some models being judged I made a little packet with reference photos and typed up a description and included in-progress pictures to show all the work that went into it. This is an example of doing the work but also just wanting to get the model finished so that I could complete the Cars AP Certificate! I hand wrote on one of the judge’s score sheet for model contests and included a prototype photo. I also included a little more information about my thoughts at the time in my April 2015 newsletter article. Basically, it seems silly how many people I saw on forums complaining they had to build a passenger car for the certificate! Earning the certificate is not about your convenience but more about stretching yourself and your skills. Passenger cars are a little different and I like the idea. For those who are modeling a railroad that doesn’t need passenger service, who said what you build has to run on your layout?!? You could give it to a friend, experiment in a different scale, have it as a display on your shelf or run a special excursion train. Be creative!

Below is what I hand wrote for the judges:

I have built similar models and they are easy. The hard part was adding all the details. I did have to cut grooves for the wire, under the weights, for the lighting. Windows were not included so I used Micro Clear for the upper windows (the lower ones I wanted open.)

I added people and and benches. I changed out the couplers and added metal wheels (insulated) so I could add lighting. I added a light board in the roof of the car.

Short passenger cars like this were not very common but the Sierra Railway, Angle’s Camp Branch used them. The line was very steep and crooked and pulled by Shays or Heislers. (see attached pictures)

I had to paint the people from bare plastic and make them all different. I painted the interior. Light weathering was done on the outside to have a well kept but used appearance.

To add pick-up power for the the lighting I used a KaDee brass spring “pulled apart” to reach the axles for the pick-up. I soldered wire to it and hid the wires inside up to the roof where the light board is.

I hope you can see that it doesn’t have to be hard but I took my time, was creative and meticulous about the details in building this model. Yes, it was a simple kit but now is so much more. You too can achieve the results you are after! 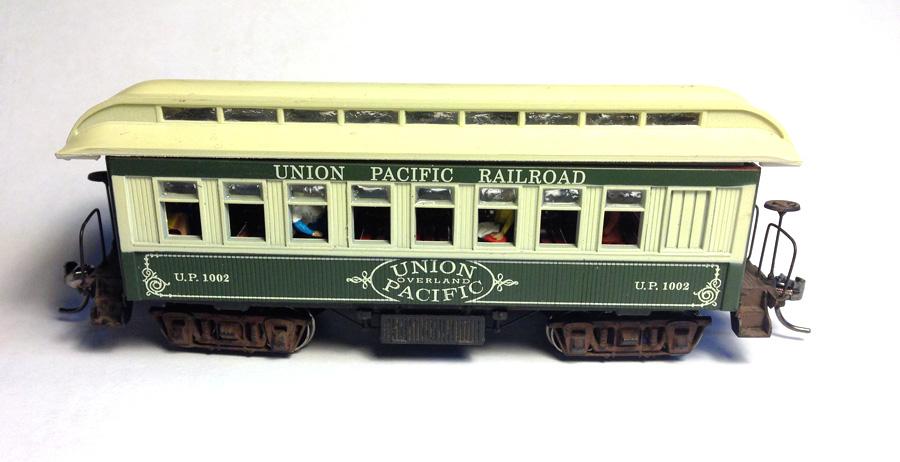