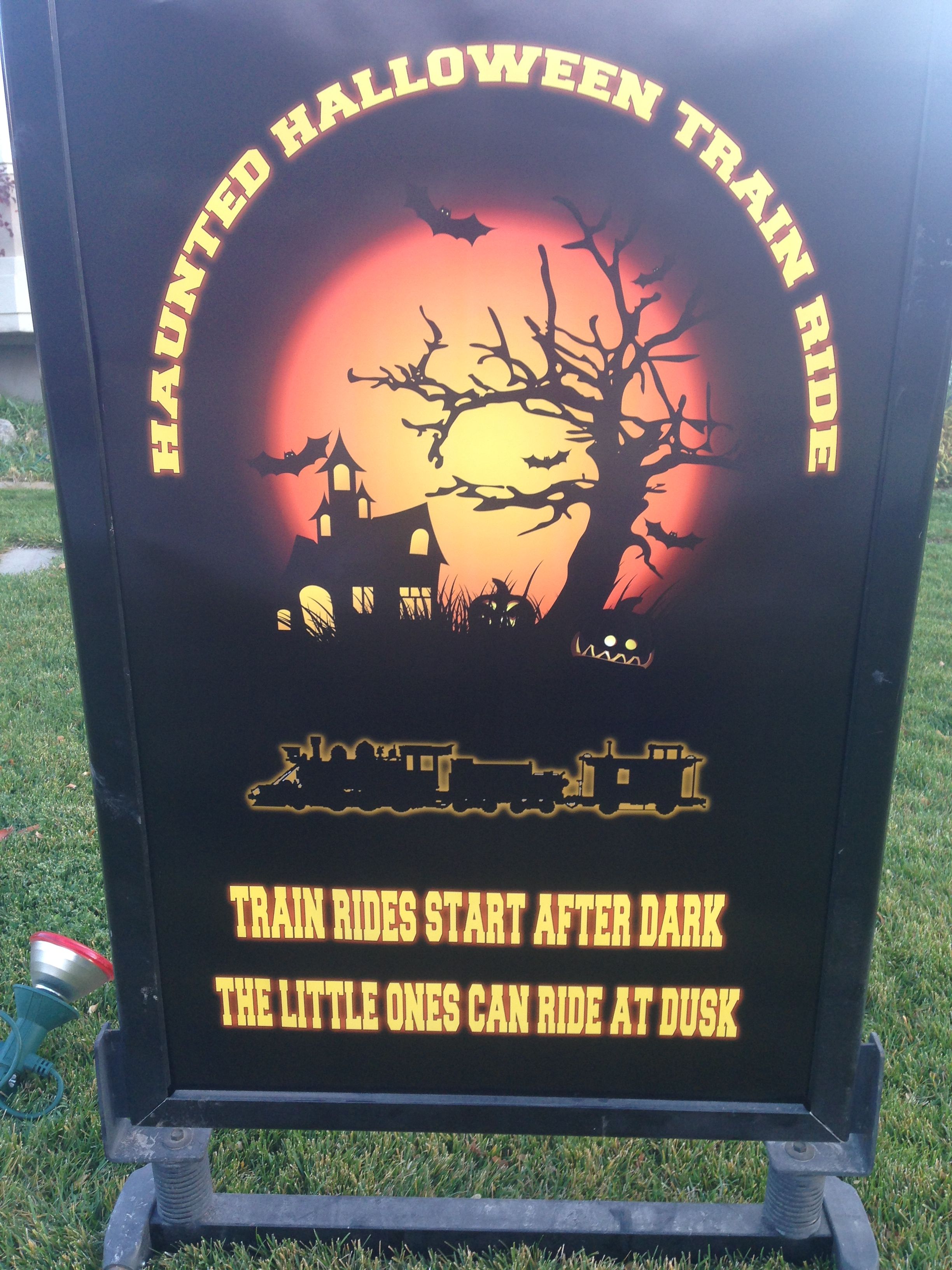 I have run my “Haunted Halloween Train Ride” every year except 2 for the past 11 years. One of those 2 it was actually raining and super windy. It can be a lot of work to prepare and run it. Sometimes the track needs adjusting so it doesn’t derail, the yard requires some maintenance (which should be done anyway), decorations put out (just for the day because who knows what the weather might do to it) and the train itself needs to be working.

The original idea was to give the neighborhood kids a chance to ride the train. Can you think of ANY OTHER day of the year when kids are all wandering the streets looking for something to do? 🙂 Seriously, with everyone’s busy schedules it truly is the only time of year everyone has set aside that if I open my gate I would get as many visitors as I do. At first we tried to make it a little more spooky but really the “haunted” part is more the anticipation of something and it is dark out. It truly is for the kids to have a fun ride.

Every year there is some reason I could give why I wouldn’t run the train and people would understand (except the kids wouldn’t). One of those years I didn’t run it, dads told me that their kids were mad at them because I did not run it. I love “kid” logic! This year was no different and it almost didn’t happen. The locomotive had started having some issues and eventually stopped working. I contacted someone locally (40 min away instead of a couple states away) and I was able to take it to him to see what was the matter. It turned out I just needed a new battery. Not cheap but doable. Feeling foolish because that was such an easy fix, on the way home I got a new battery and it seemed all was well. It worked when I got home but it was late so I didn’t run it much. A few days later when I was going to test out the whole system, track work, etc., it was again “playing” dead! 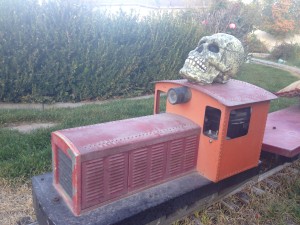 I felt frustrated and ready to scrap it this year. I knew my friend could install a new control system but when we had talked about it he had said it could take 2-3 weeks. Halloween was exactly one week away and if he could do it I still needed to check the track. I finally gave him a call to see if he could get it done. He knew I ran it for the kids at Halloween so if he couldn’t do it I wouldn’t need it for awhile. To my surprise, he said he could! Thanks goes out to Roy who put me ahead of his other customers and stayed up late getting it done! I really like the responsiveness of the motor to the controller, which is smaller and easier to hold, but also the fact that it now has sound, (engine revving, bell and horn plus the headlight is fixed) which I’ve always wanted to add. It’s a cool feature that is more for me than the kids but hey, I’m the one running it all night. It also got me more excited to run it again.

My only “obstacle” now is that my son’s soccer game was about 45 min away in the middle of the day leaving me with less time to get ready. One of my daughters was a huge help this year and my son did help out too. We got it set up and ready to run. Last year I spent a bunch of time on the track and this year everything was still running smoothly. I was able to borrow a few inflatables which makes setup easier. I have a few but adding to what I have, we didn’t have to put out as much of the “small scenes” as I normally do. Often they are hard to see anyway once it really gets dark. 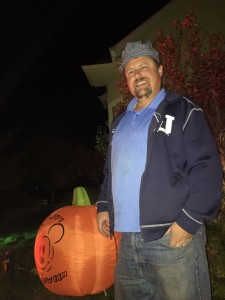 Because my track isn’t perfect I like to have my passengers sit as low as possible. In the gondola that I pull – 2 adult sized or 3 regular kids, or 4 if they are smaller, fit in. I don’t like to have only 1 because I like the weight distributed so that I don’t get derailments. Occasionally a derailment will happen and I say, “The ghosts are trying to get us.” This year the only spot was right near the end so that made it convenient for them to just get off there.

Some time ago I had been thinking about why I enjoy my railroad over other traditional ride-on ones like mine. Besides it being mine, I figured out with the many turns and view blocks (and dark when running at night) you can’t see the whole thing while you are riding. Several others that I’ve ridden, while fun, go a bit slower and have big sweeping curves. I enjoy mine because you can’t see too far ahead where you are going and some spots I can go faster but then take it easy on the curves which are very tight.

I counted the number of riders again this year. Last year I had a clicker that made it easy to keep track. I’ve always estimated but now I know that I gave 175 people rides. This year it was 170. Every other year there has been one or two adults ride and that’s been about the number consistently since I started. This year I counted 9! I don’t know why the huge jump but there were parents who rode to hold a “little one” as well as a dad just saying, “Can I go?” I can hear what they are saying behind me and the adults say the same things the kids say: THIS IS AWESOME! IT IS SO COOL! 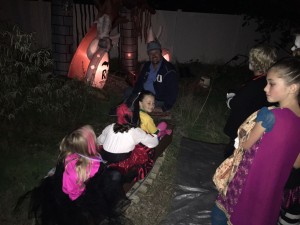 For me, it is a way to “give back” to the neighborhood: a chance to do something for others that they can have fun doing. Yes, I have fun driving it 2 ½ – 3 hours without a break and estimate some 60 times around the loop for me. However, it is the comments and excitement from others which is the reason I continue to do it every year. I know most of the kids in my neighborhood but I asked one girl if she had ridden it before and her reply was, “Yes! It’s my favorite Halloween tradition!” Cheers of “I want to go again, I want to go again!” when only halfway around the first time along with the laughter and fun make it worthwhile.

I know there are those who make a point to come every year. This year I know there were a few young “first timers” who I know will be back. Just about the time I was ready to close the gate a couple more girls came who I could tell had not ridden before. They had a blast and loved it the whole way. They said, “That was best thing I’ve ever done in my whole entire life!” The dad said it was true 🙂 He was pretty surprised that I was running the train and amazed at it. As he shook my hand thanking me he said, “Thanks for keeping the Spirit alive.”

All the comments and thanks this year were great and that one especially from someone I had never met meant a lot. Whatever we choose to do in life, it is usually our interactions with others that have the deepest impact. I enjoy sharing my hobby with others. It does not matter how much you like trains or not. Everyone has fun riding my little railroad in my backyard and by sharing that experience we can enjoy the journey together.